Are you wondering whether a cooling tower vs. industrial chiller is better for your application? We are here to help! Cooling towers and industrial chillers serve similar purposes – both systems can be used to cool industrial processes such as food processing units, metal plating and more. However, they differ in their mode of operation.

To find out which system is best for your cooling needs, you should understand how cooling towers and chillers work.

How a Cooling Tower Works 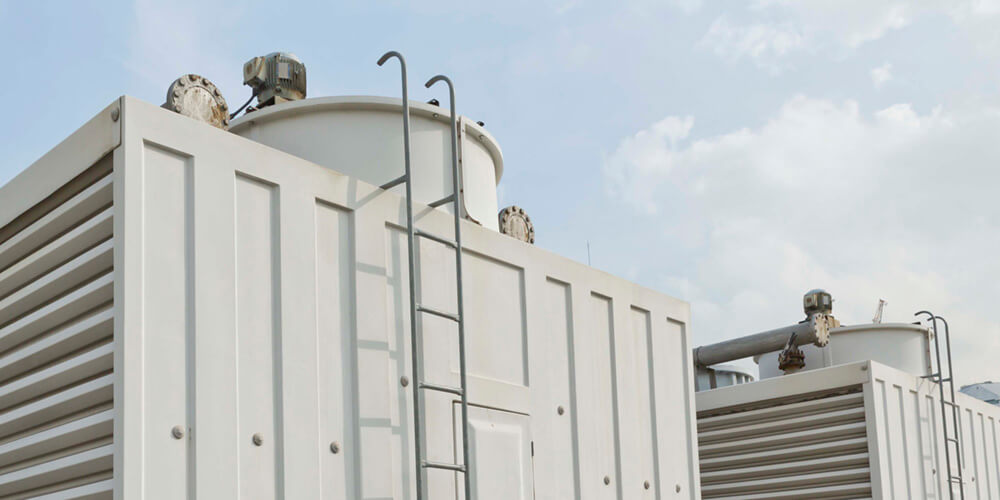 A cooling tower is a large heat exchanger unit which provides cooling water to remove heat from a coolant (most often water) that has been used to cool machinery, process fluids, or buildings. When the cooling water meets with air, a small portion evaporates, lowering its temperature. This is known as ‘evaporative cooling.’

It is common to find cooling towers conveniently situated near bodies of water such as lakes and rivers to ensure a constant supply of water for cooling.

Heated water from an industrial process can enter a heat exchanger or condenser and flow through the pipework into the cooling tower for heat removal, or flow directly through the tower. Spray nozzles inside the tower spray the water on a fill material whose larger surface area allows for maximum contact with air and increases the rate of evaporation.

Cooling fans located within the tower aid the cooling process, and the drift eliminators remove the tiny droplets of water produced in the tower air stream during evaporation.

A cooling tower is comprised of water pumps and a large basin. The pumps provide water for cooling while the basin collects and drains discharged water from the system. The basin is a large hyperboloid, cylindrical or rectangular structure made of plastic, composite, concrete or steel and contains the spray nozzles, cooling tower fill media, and other heat dispersion equipment.

Although large cooling towers structures (over 200 ft in height and 100 meters in diameter) are common, there are smaller systems that can be installed at smaller sites and on top of buildings.

Cooling towers are typically used in large-scale cooling operations such as power generation, oil and gas refining, and thermal power stations. One very important deciding factor on choosing a chiller or a cooling tower should be based on the required coolant temperature.

Some chiller designs can allow for cooling temperatures from 70F-100F+ if designed to accommodate such conditions. Again, depending on system design, a chiller can typically hold a closer temperature tolerance with respect to a desired temperature set point.

How an Industrial Chiller Works 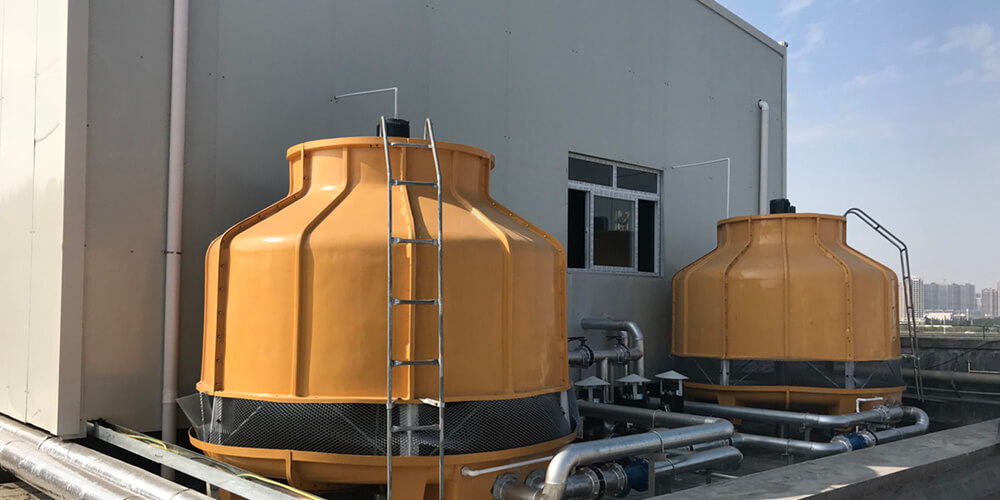 An industrial chiller removes heat from hot, gaseous coolant coming from a process using water or heat transfer fluid and transfers this heat to a refrigerant. Then the hot (used) refrigerant is cooled and regenerated with ambient air or water from a tower or outside source, and then returns for recirculation.

Industrial chillers can be air-cooled or water-cooled, depending on the medium for dissipating heat from the system. In air-cooled chillers, the hot coolant which has undergone a phase change into a gas (in the evaporator) is exposed to the air around the system which cools it and turns it back into a liquid. In water-cooled chillers, a cooling tower provides water to cool and condense the coolant.

Cooling Tower vs. Chiller – Do I Only Need One or Both?

As you’ve now learned, the main difference between a chiller and cooling tower is in the mode of operation. Cooling towers and chillers can be used independently or in combination for large-scale, efficient cooling.

Before making the decision to utilize both, consider factors such as your required volume of cooling, access to water, available space, and budget. Feel free to use our tools to help make an informed chiller capacity calculation for your application.

How Does a Cooling Tower and Chiller Work Together?

For small-scale applications such as chilling small rooms and exhausts of equipment, you can use a suitably sized air-cooled or water-cooled chiller and a portable cooling tower installed on the roof of your building. For large-scale cooling operations, combining the two systems might be a more cost-effective option than using them separately.

How does a chiller work alongside a cooling tower? Pairing the two together can help create a central cooling plant for a large building. The chiller unit can be located at the base floor of the building (when using a water-cooled chiller) or on the roof (when using an air-cooled chiller).

The cooling tower should also stay on top of the roof for optimum heat dissipation. Pipes (known as risers) running from the chiller to the cooling tower transport chilled water and refrigerant throughout the building.

2 thoughts on “Cooling Tower VS. Chiller – How Cooling Towers And Chillers Work Together”